This farm is wonderful. Silvia, Alfred, and company have been a joy to fellowship with each day. Instead of requiring our every energy, they are grateful for our help. They have three cats, one of which has recently given birth to three. The kittens are two red and one red, black & white. The 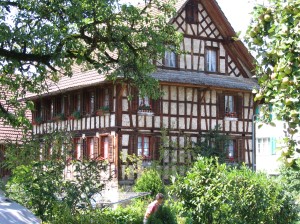 two red are both males. There is a habit of calling red cats Ginger, and of course they hav e one red aptly named.

Yesterday we met Alfred, Sr. and although he doesn’t speak English he invited Philip and me to attend Sunday service with him. Yesterday Philip and he rode bikes to his late wife’s gravesite, near the church to place flowers. So, Philip, at least, had some idea where we were going.

After a quick breakfast, we rode in Alfred Sr’s car to his church. The Kappel (church) was grand in European style, however, cold. We were blessed by the music of an alpine choir of yodelers as well as a baptism of a little girl a mere few months old named Jessica.

After service we went on a carriage ride with Silvia and Alfred’s daughter, Regina’s boyfriend, while he trained a young woman to drive horses. It was a long, cool, bumpy ride through the countryside and wood. We bounced over the stone path a a gallop at one time with the cold breeze stinging our faces. Nevertheless, it was a wonderfully exhilerating adventure.

Tonight is the last night of the Zurich film fest. Because Silvia and Alfred’s son is the sound engineer for the production, he has secured five seats for us near the lake. I understand they do this once each year in August for two-weeks. Tonight’s movie is to be a comedy. Silvia tells me the screen will be on top of the lake and at the start will raise over the water into position for the showing. That in itself should be pretty spectacular. The movie title is Son of Rambow.

What a fun and funny movie! Son of Rambow! It was cold on the lake, but we totally enjoyed the movie. Even in the cold they gave every attender a choice of ice cream, bar or dish. We sat in bleachers near the production booth. Watching the screen come up over the water and then sitting and seeing the movie was an experience I’ll never forget!